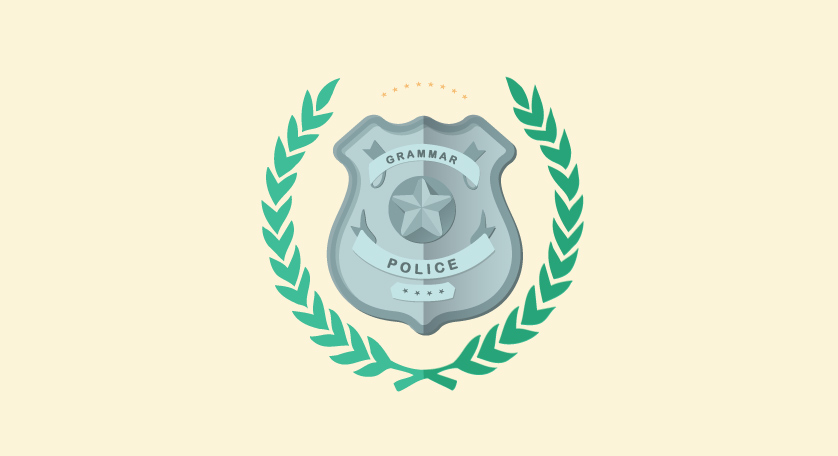 I know you mean good. You think your protecting the sanctity of the English language. But their is so much more to language then just spelling and grammar.

I also think that what you usually criticize as "poor grammar" is often just an honest typo. We’re only human after all.  But I do agree that mistakes can be distracting:

We should obviously try our best to adhere to the same set of rules so that what we say and write doesn’t sound like gibberish. But the rules that we’re taught in school are hardly sacred:

English is standardized so that it’s possible to teach, understand, and evaluate fairly, but treating these rules like they're set in stone actually restricts effective communication when we're talking to real people.

So let’s forget all that for a second and talk about the kind of grammar that matters more for marketers.

David Ogilvy, the uber-quotable Father of Advertising, once said:

“I don’t know the rules of grammar… If you’re trying to persuade people to do something, or buy something, it seems to me you should use their language, the language they use every day, the language in which they think. We try to write in the vernacular.”

I agree with Ogilvy about the inflated importance of these rules, but I disagree with his statement about not knowing the rules of grammar. I think he understood the rules that matter to marketers, the rules that describe the way a group of people naturally use language.

There’s actually more than one way to approach grammar and knowing the difference between “their” and “there” isn't everything when it comes to employing language as a tool.

Prescriptive grammar is the set of hard rules that define how language should be used and structured. This is the black-and-white way to use language that the grammar police love to enforce.

Descriptive grammar looks at how language is actually used by specific groups of people. There’s no right or wrong; there’s only what is and that's subject to change. This is the more profitable grammar.

It’s important to know the rules of grammar to the extent that they help you eliminate distractions and prove to your readers that you're literate. It’s far more important, however, to understand the ways people are using language in their day-to-day lives. That’s where the marketing insights are.

Descriptive grammar: The language of Google

Descriptive grammar includes the subjective meaning of words and how we actually apply them. This is integral to SEO and keyword research.

English purists despise the word “selfie”, for example. But due to its popular presence in certain groups' vernacular, it was actually the Word of the Year in 2013 for Oxford Dictionaries. Did the grammar police bemoan this? Of course. But for marketers, it’s more important to observe these changes and the opportunities they create.

While we use certain terminology internally, we also need to understand how our prospects and customers talk about our products and industry.

At Uberflip we might call our product a “hub," but those who don't use our language might consider our product any of the following:

The hub fits into these different categories, but we wouldn’t reach prospects who articulated their needs in their own terms if we relied solely on the word “hub".

Different groups place more value on certain words and rely on others more frequently. Some common words might even carry an entirely different meaning; it all depends on how that group uses it.

The B2B marketing vocabulary — or lexicon — consists of words that we marketers can easily identify and relate to:

You could express these concepts and ideas in other ways, but then they wouldn't hold the same sway in coversation or writing. These words are part of business jargon, and are basically ineffective in most B2C communication.

Sometimes I’ll joke about how we marketers don’t want to “see Spot run,” but might be interested in learning “how Spot optimized his walking speed”. In all seriousness, though, we leverage this kind of language a lot.  It's easy to forget we're all human and can speak that language too.

At the Content Marketing World conference this year, keynote speaker Kevin Spacey said, “I could give you 45 minutes on the ROI of effective SEO— that’s right I know your ****ing terms!” However, he opted to talk about storytelling instead.

Storytelling provided the overlap that let Spacey speak to an audience of content marketers as an actor, director, and producer. His audience hung onto his every word because it has a significant presence in the content marketing vocabulary.

Spacey not only spoke about an idea that meant something to his audience, in terms that were relevant to them, but he led his audience by the ears, something you can also do with writing when you’re not a prisoner of the rules.

Writing for the ears

Prescriptive grammar is seldom noticed by readers until it’s neglected in an obvious manner. It’s not the end of the world, but it’s definitely distracting to our eyes.

Yet the most appealing (and subsequently persuasive) writing is often written for our ears. Just listen to how politicians speak or how the tobacco industry justifies its existence. What they say might not be much, but the way they say it is music.

Even when we read silently, most of us read out loud in our heads — a process called subvocalization. We often hear what we read as internal speech. Because of this, the average reader only reads at 150 words per minute, which is roughly the speed of conversational speech.

Some of the best writers among marketers  —  like Ann Handley, Seth Godin, or the folks at Copyblogger — deliberately employ a conversational style in their writing. They use contractions, play with words, but most of all they write with rhythm. They create momentum with their words.

This discourages haphazard skimming because we’re more inclined to want to “hear” their words on top of the information and value being offered. And when there's so much content floating around, this could make or break your blog post or copy.

Learn the rules so you can break them

I don't know all the rules of grammar, and I second-guess myself a lot when I edit (although every editor should). But if you ever feel that a rule sacrifices the clarity or personality of a piece of writing, you should put the audience first and the grammar police second.

I’m not undermining the importance of proper punctuation and syntax, but forcing yourself to always use “he or she” instead of “their” is wordy and doesn't make much sense.

The narrow view of language enforced by the grammar police, or prescriptivists, is just one aspect. Follow the rules as best you can. But when you have to pick one, choose the read pen that moves your audience over the red pen that people seldom see. Speak the English that resonates with your audience.

Trying to be the world’s copy editor comes across as pedantic anyway — just like using the word “pedantic” when you’re talking to, say, a motorcycle gang. And frankly, you’re only painting a target on your back that invites higher ranking members of the grammar police to take a shot at you.

I know that writing about grammar is tantamount to dousing your comment section with gasoline. So, as I draw to a close, maybe I’ll light a match and let the fine members of the grammar police voice they’re own opinions on the subject ;)